My dad has a 1993-ish Sylvan Barritz that he purchased new.  The boat gets used only about 3-4 months out of the year, and pretty infrequently at that.  Still, our family has gotten almost 25 years of enjoyment out of this boat with relatively little trouble.


Last year (2015), he had a little bit of trouble with a 60A breaker between the alternator and the battery that kept tripping.  One time it tripped and would not reset while he was out in the middle of the bay with some friends.  The solution at that time was to simply eliminate the breaker, which would let them at least get back to shore.  The thinking was that maybe the breaker was flaky after all of the time the nearly 25 year-old boat spends sitting, from fall through spring.

This year (2016) he had the entire boat reupholstered, and it looks like new.  He was excited to get it on the water, and my kids were excited to go swimming, so for the first voyage this year he and I decided to take it out and iron out any kinks from sitting all winter.  Launching was fine, and after a little cranking she started right up.  We headed east from Gladstone across Little Bay de Noc for our shakedown run.  The boat was running well and we got her right on plane.  Things were looking fine until about half way across the bay the engine suddenly died and smoke started pouring out from under the engine cover.

Some quick investigation and we found that the 'bush fix' of eliminating the 60A breaker was thankfully not done in a serious or long term way.  The two 8 gauge wires that were meant to be connected and protected by the 60A circuit breaker were smoking and mostly melted, and the small sheet metal screw that was intended last year as a stop gap measure to hold them together had thankfully let go, preventing a major fire.

Obviously, we had a dead short on our hands somewhere.  Nothing else in the boat would draw as much current as an oven, which given the smoke and melted wires, is what we had.  We waited a bit for the wires to cool and then tried to touch them together where they had formerly been held with a screw.  This produced a violent arc, as the two red wires were now somehow one red, one black.

Luckily my dad had a few tools on board, so without too much trouble we pulled the main wire from the back of the alternator and again tried to touch the red wires together.  This time, no arc.  This confirmed the suspicion that the alternator was the cause of the short, and without the 60A breaker in the circuit the wires had no choice but to become toaster elements.

After landing the boat we pulled her home and I pulled out the old alternator.  We found it had a lot of missing cooling fins and the unit would rattle when shaken.

Sidebar:  Let me briefly describe the engine in this boat.  It is a GM-derived 3.0L 4 cylinder.  Someone should write up the entire history of this thing, but from what I've read, it appears to be developed for marine use by Mercury Marine (however some sources say Yamaha developed it).  Some people say it derived from the 2.5L iron duke, others say no, it was an older engine.  Nevertheless this engine seems to have a home in lots of boats.

The stern drive is another story.  This particular one is from Yamaha, and from what I can tell it is quite rare in the US.  A search of marine forums for "Yamaha 3.0L stern drive" and you will find posts where people are in search of parts, or they bought such a boat as a 'project boat' and quickly found they can't find parts for the stern drive.

Still, I thought finding an alternator would not be a big deal for this thing.  Another side note: I quickly discovered that you *must* use a marine alternator replacement, as they are fitted with spark arresting devices to avoid igniting the fumes in the engine compartment.  Do NOT attempt to replace this alternator with an automotive unit!

A first search yielded a guy trying to sell this exact alternator, used, for $300: 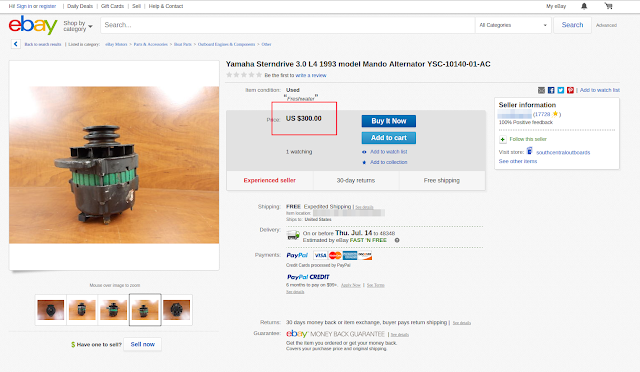 Absolutely no way would I purchase a 25 year old alternator for $300.  I blurred out the seller name above as I don't want this to reflect badly on him; if he can get $300 for it, more power to him.  But having the exact replacement isn't necessary.  If I can get a 60A unit or a 40A unit it should work fine.  (Even a 90A unit would be fine if I knew that the wires would handle the current and the existing circuit breaker were upgraded.)

You can search around and find out more panic-inducing results like this one from boats.net, indicating that it is NOT AVAILABLE and OBSOLETE even thought it used in a lot of different marine engines:

Finally I hit on DB Electrical and their AMN0016, which is also available at their Amazon Store. 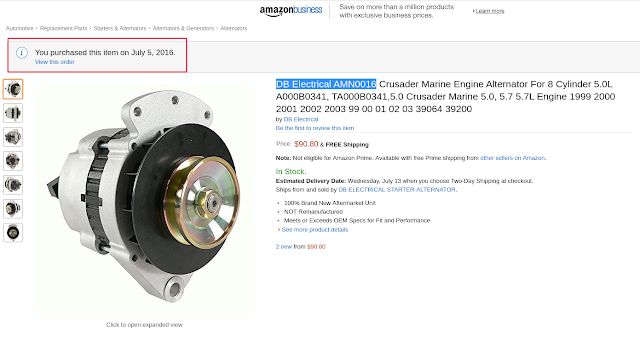 Specs are nearly the same.  The stock alternator was 51A, this one is listed as 55A.  It is marine-grade.  It has a one year warranty. 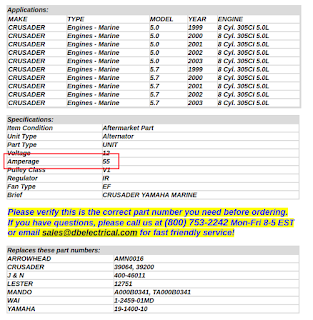 The only difference I can find, physically, is that this unit has a single pulley while the stock unit had a double pulleys, for use in two different mounting applications.  Still, if you need a different pulley offset in your application you can swap out the single pulley for the double that you already have.  So don't scrap the existing one until you have the new one in your hands.

I tried calling DB Electrical to discuss this application before I bought it but their tech support line on July 5th was busy, with > 20 minute wait time, so I decided to just order it.  As long as the housing matched the picture it should work fine.  The bolt that it pivots on is a huge 1/2" grade 8 monster, and that hole diameter and the width of the mounting 'foot' was what I was going to ask about.

Here it is installed.  Note the single pulley that came on it was perfectly aligned.  It is literally a drop-in replacement.

The datasheet that came with it: 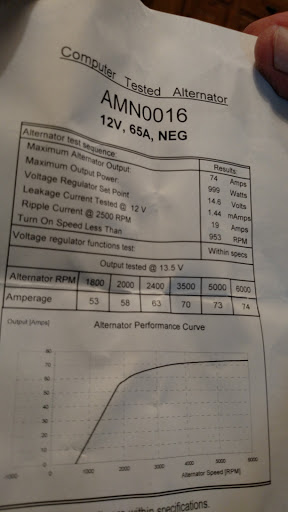 I wasn't there for the first trip after installation but my dad reports that it worked flawlessly.  He notes that it isn't charging at idle, but just above idle he is seeing 14V on his voltmeter.  This seems to be confirmed by the datasheet above; there is no current output until about 750 rpm or so.  This might be remedied by swapping on a slightly smaller pulley if you need charging while at idle.  Typically you're not sitting and idling the boat for long so I don't think this is a problem.

Disclaimer:  I post this information in the hopes that it helps someone else.  You are responsible for your own property and you are responsible for doing your own homework and research.  If you are not comfortable with a non-standard replacement, you can have the original unit rebuilt (find a starter/alternator repairman), or you can try your luck with a 25 year old used replacement.
Posted by William Skellenger at 9:22 AM No comments: